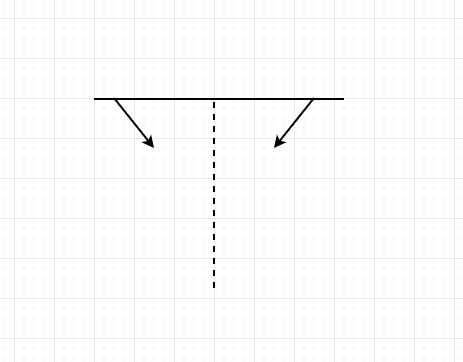 The motors would still generate the same amount of thrust, however it would be aimed in a different direction.

Think of the thrust as horizontal and vertical vectors. You can work out the ratio of these vectors using trigonometry to work out how much of that thrust is going to be effective in the downwards direction and how much will be horizontal.

The amount of force generated remains the same, however it is applied in a different direction; you therefore get an effective reduction in force for a given axis. To use the two extremes:

Aligning the motor at angles between these splits the force between horizontal and vertical. The 'best' angle for your design of course depends on the type of aircraft; for a rotary wing aircraft you need to generate a lot of lift from the rotors but for a fixed wing you want thrust, while the aerofoils create the lift.

In your image, the airflow would remain the same but the two motors would be pulling against each other - this decreases efficiency, however the advantage can be improved manoeuvrability in flight as rather than just relying on gravity to roll and pitch the aircraft you can use the angled thrust to 'push' the aircraft around.

8
How much air-intake space do I need in front of my DJI Spark's propellers?
4
What is the difference between a patch and helical antenna?
10
Do propellers layered on top of each other have twice the thrust of one propeller?
4
How useful is knowing the torque generated by a motor prop combination?
5
What factors affect the noise level of propellers?