What is the purpose of adjusting the thrust angle for model aircraft?

I have a few model aircraft and know that the motor is often slightly offset. I have heard conflicting reasons as to why this is done. Some people claim it is because of motor torque and other people say that it is done because of other things, and not really because of torque. What is the most significant reason that the thrust angle is usually adjusted on model aircraft?

fixed-wing thrust-angle
Share
Improve this question
edited May 11 '20 at 7:24

Typically the motor will point down and to the right. There can be various reasons for this. 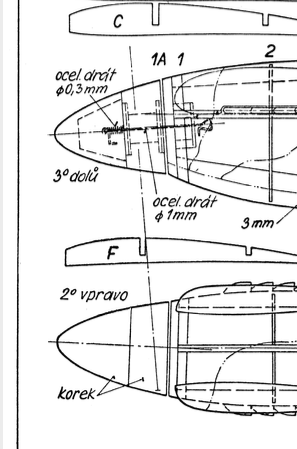 Sometimes it's to align the motor with the true flight direction, because the wings need some AOA (Angle Of AttacK) greater than 0. In the excerpt above, you can see that there's a 3 degree downward tilt. If you look at the original plan, the wings are mounted flat to the fuselage. A 3 degree AOA is pretty normal for cruise flight, so this motor is mounted so that it's pointed in the direction of movement.

If it were not pointing downward, then when you changed thrust it would have a tendency to momentarily sink/climb.

Another advantage of pointing down is that it increases pitch down tendency (or decreases pitch up tendency) when power is applied. Pitching down is safer since it drives you away from stall, instead of toward it. This is especially valuable in the case of positive pitch stability craft where there is a natural tendency to pitch up as airspeed increases.

You'll find that full-scale aircraft have the motor aligned with the fuselage, but their wings mounted at a 2-3 degree incidence angle so that the fuselage is level while the plane is flying forward. It turns out that the squishy humans seated inside prefer not to be seated on a slope.

Pointing to the right

In some models, the motor can be turned to the right so that its thrust counteracts the p-factor, which tends to turn the plane to the left. This makes the plane easier to handle when under high power at slower speeds when the rudder is less effective.

For example a model with a high mounted pusher prop mounted behind the main wing will often point up slightly as the battery will typically be mounted lower. On a flying wing where the centre of gravity aligns with the motor the motor will often be pointing directly through the model in a straight line

Not the answer you're looking for? Browse other questions tagged fixed-wing thrust-angle or ask your own question.

6
How can I set up differential thrust for a model airplane?
6
What are the typical methods of constructing a large airframe?
8
What is the typical glide ratio of Kline-Fogleman airfoils?
10
Do aerodynamics scale for model aircraft?
3
How do aerodynamics for small model aircraft differ from that of larger aircraft?
8
What obstacles are there in making ultra long range model aircraft?
5
Picking the right prop pitch for my plane
9
Do laws on 'drones' in Australia apply to fixed wing model aircraft?
4
What registration is required for 250g to 2kg drones in Australia?
2
How to determine the minimum thrust to weight ratio for a fixed-wing aircraft?