Can circularly and linearly polarized antennae be used together for FPV?

I have a few spare antennae of mixed polarizations I'd like to be able to reuse for my FPV gear.

Is there anything I need to know about incompatible configurations of mismatched polarizations between my transmitting and receiving antennae?

The compatibility of mixed polarity antennae depends greatly. For a little background in RF polarity, this diagram shows the difference between the four main types of antenna polarization available: (mixed/elliptical polarization do exist) 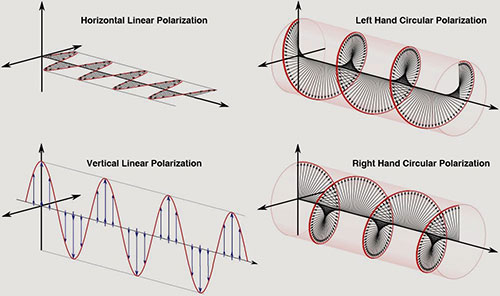 In general, it is best if the TX and RX antennae match in polarization, but some other combinations are possible while minimizing signal strength loss.

As pointed out by @FlashCactus, only circular → circular polarization matches benefit from the multipath interference reduction effect. This is because circularly polarized waves switch polarization when they bounce off of an obstruction (i.e. RHCP → LHCP and vice versa), so duplicate signals taking an odd number of bounces to reach the receiver will be ignored by the antenna. (they will be recieved as the opposite polarization with which they were transmitted)

¹: Omnidirectional antennae are also not truly omnidirectional; they have a region of low gain along their axis, and will transmit/receive poorly in that direction. It is best to face them sideways towards the other antenna for best reception. The same is true for linear antennae; they receive&transmit best from their sides and worst along the antenna.

This configuration can be useful if you want to spectate someone who has the opposite transmitting antenna handedness from you (LHCP while you use RHCP, for example), or to scan the radio spectrum that might contain signals of different polarization (RHCP, LHCP or linear) without switching the antenna: A linear antenna will receive both RHCP and LHCP signals equally well.

This configuration can be commonly seen in the case of micro-quads like Tinywhoops which only come with linearly polarized transmitter antennae. Here, the orientation-agnostic benefits of receiving a linearly polarized signal with a circularly polarized antenna (and the convenience of not replacing the antennae on your goggles) are often worth the signal strength reduction.

To add to ifconfig's excellent summation of how the signal strength would be affected by mismatched polarizations, I must point out that in order to benefit from the reduction of multipath interference offered by circular polarized antennae, both the transmitting and receiving antenna need to be circularly polarized.

For more information on how this works, see this question about circular polarization in general.

I must also point out that while the signal strength of CP antennae indeed does not depend on how they are oriented relative to each other, it does depend on how each antenna is oriented relative to the other end, i.e. which side of the receiving antenna is facing the transmitter and vice versa. This is most significant if using directional antennae, such as a patch or helical antenna.

To learn more about directional gain and how it affects the performance of an antenna, refer to this question.

Not the answer you're looking for? Browse other questions tagged transmitter antenna first-person-view receiver or ask your own question.

13
What is circular polarization in antennae?
7
What is antenna gain?
5
What is a "mushroom antenna"?
2
Does FPV transmitter antenna need to match the goggle receiver antenna?

6
What makes mushroom antennae so good at receiving and transmitting omnidirectionally?
4
What is the difference between a patch and helical antenna?
5
What is a "mushroom antenna"?
5
Can I mount my RX and VTX antennae next to one another?
7
Reasonably priced FPV Drone for beginner
5
Binding DX5e (or any other hobby controller) to generic "toy" drone - protocol compatability
2
recommendations for a DIY/dev platform lifter drone
4
Is it possible to use the head tracking in a FPV goggle with a computer?
4
IR and/or Thermal FPV
5
FPV system for ground vehicle