Gain, as a general term, is a measure of how large or strong something (a voltage, a radio wave, a sound wave, or whatever else) is relative to some baseline value of the thing being measured. A gain is a ratio: If a device takes a voltage on one end and makes it 20x larger (amplifies) it 20-fold, it has a gain of 20. In practice they are represented using decibels, a special unit that makes it easy to work with very large or small ratios. See the note at the end of this answer for more information about them.

Consequently, the gain of an antenna is the ratio of how much stronger the radio waves generated by the antenna are, relative to those generated by a standard "reference antenna" when fed by the same signal. This reference antenna used as a baseline is considered to have a gain of 0 dB, or 1:1 (equal to itself).

The dipole itself has a gain of 2.15 dBi (and 0 dBd), so to convert a dBi gain to a dBd gain you subtract 2.15 from it, or add the same number to convert the other way around.

Every antenna receives the same way as it transmits, so an antenna's reception gain (how strong of an electric signal is generated in it by a radio wave, relative to the chosen reference antenna) is always the same as its transmission gain.

An antenna with 3 dB (2x) gain in a certain direction will transmit 2x the power in that direction, but also radio waves coming from this direction will generate 2x stronger signals for a connected receiver to detect.

Well, there is a caveat to high gain, and it basically boils down to: There ain't no such thing as a free lunch.

True isotropic antennae do not exist in the real world, i.e. no real antenna radiates equally strong in all directions. There are directions in which it will radiate the strongest, and others in which it doesn't radiate at all. So the gain of a real antenna is not the same in all directions either: in some it is stronger, in some it is weaker. The easiest way to show this is a graph showing the antenna’s gain in every direction around the antenna. That graph is called a radiation pattern and looks like this: 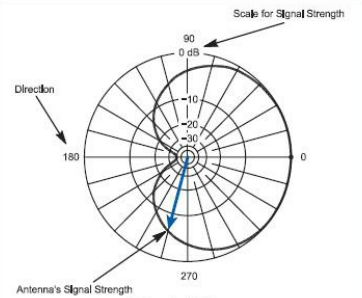 Also, you can't get more out of an antenna than you put into it. The sum of all power radiated in all directions is always equal to the power that goes in (Minus a small percentage of losses); Antennae create gain by radiating this power such that the created waves add up in the preferred direction and cancel in others.

So if an antenna has a higher than baseline (positive) gain in some direction, you pay for that by having a negative gain in other directions. Gain only focuses power — it does not create power.

For our imaginary 13 dBd antenna it means that only a small sector will get this much gain, and all the other directions will have almost zero radiated power to make up for it.

So gain is not only the measure of how well an antenna receives or transmits, it's also a measure of the antenna's directivity: If the antenna focuses all of its power in a tight cone, it will have a huge gain within that cone, and a huge gain rating on the box... But its gain outside of that cone will be almost nonexistent. So when you are choosing a directional antenna, the gain is also an indication how directional it really is. Lower-gain patch antennae will give you a soft, forgiving cone but lower gain in it, while high-gain directionals will have a very tight zone in which they could transmit or receive at all, but within it they will be super powerful.

They have an equal (and positive) gain in any direction perpendicular to the antenna, which gets lower as the direction gets closer to parallel to the antenna. These antennae also have their own kind of directivity: if you mount the antenna vertically, the "horizontal" gain will be the same in any direction, but it can be higher or lower relative to the "more vertical" directions, making the donut flatter. In other words, the antenna can prioritize gain towards the horizon versus overhead gain more or less.

In many engineering fields ratios can easily get extremely large or extremely minuscule and tend to multiply a lot. Radio is one of the most prominent of those. At the input to a receiver, signals are frequently smaller than one ten-billionth of a watt. When they come out of a transmitter, they’re often measured in kilowatts! Antennas, propagation and electronic circuits change signal strengths by many factors of ten.

10
Should Crossfire transmitter antenna orientation match receiver antenna orientation?
6
What makes mushroom antennae so good at receiving and transmitting omnidirectionally?
7
Calculating the range of an FPV drone
4
What is the difference between a patch and helical antenna?
5
What is a "mushroom antenna"?
2
Does FPV transmitter antenna need to match the goggle receiver antenna?
3
In what direction should I orient the dipole antenna on my 2.4 GHz RC transmitter?
5
Can I mount my RX and VTX antennae next to one another?
4
How does having bent antenna impact reception?
5
multi-protocol transmitters -- difference between stm32 4-in-1 and stm32 c2500 only ? [tx16s Vs. tx12]