How do I set up the RSSI readout on an XM+ receiver channel?

I have an old XM+ receiver that does not do RSSI. Some of the newer ones come with RSSI set up on a channel. How can I set up RSSI to be on a certain channel?

For the sake of the random visitor I must first point out that the XM and XM+ receivers do not include telemetry, as in they don't transmit anything back to your remote over the radio link. What the XM/XM+ do offer, however, is an onboard RSSI readout, i.e. supplying RSSI information directly to the flight controller.

These receivers have two ways of communicating that readout.

The first is the RSSI pad, indicated on the schematic in the receiver's manual. 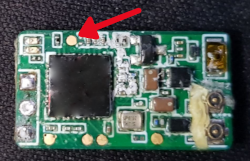 You can solder a wire to this pad, and it will output the RSSI value as a voltage which can then be read by your flight controller via an ADC pin (usually labeled RSSI). This feature is, as far as I know, always on.

The second, which is the one you're asking about, is transmitting the RSSI readout as one of the RC channels, either channel 8 or channel 16.

To enable the latter option (if it's not enabled) or change the channel, you'll have to flash the corresponding firmware to the receiver. If you go to the FrSky site, to the page that offers firmwares for your receiver, and download the archive, you'll see six files, labeled something like:

The files ending in RSSI8/RSSI16 are the ones you need to flash to enable RSSI readout to the corresponding channel; the ones without any suffix have this feature disabled, if you want all the channels as actual channels and use the analog RSSI readout. Also remember to flash the RF option (FCC or LBT) that matches your transmitter, to avoid possible issues when binding.

After flashing, you'll have to rebind the receiver and configure your flight controller to correctly read the RSSI. In betaflight you need the RSSI_ADC option to be enabled to use the first option (analog readout), and you need it to be disabled to use the RSSI-on-a-channel feature. As long as you have the RSSI_ADC option enabled, the RSSI channel setting in the receiver tab won't be saved when you set it.

To do this is fairly simple. All you need to do is:

Not the answer you're looking for? Browse other questions tagged transmitter frsky receiver rssi frsky-xm or ask your own question.

4
How to use an XM+ receiver without a flight controller?
7
Does the Meteor65 Acro support Spektrum RSSI?
4
Analog Graupner MC-12 with R-700 receiver
5
FrSky receiver snap-on connection problem
5
Taranis X9D Plus 2019: Switches SE,SF,SG,SH, and SI are not working/responding on Betaflight
5
Is it feasible to use an RC car transmitter/receiver to control an RC plane?
7
Possible to use Eachine E160 with Futaba T6EX transmitter/receiver set?
5
Good beginner 6-ch radio with configurable controls under $80
3
Does the FS-R6B receiver work with the JJPRO EM-16 transmitter?
6
Working on a Quadcopter. Unsure if this flight controller supports an FS-IA6 receiver