Why do a quadcopter's opposite rotors spin in the same direction?

All the quadcopters I've seen have four motors, arranged in a square-like shape. Two of these rotors spin one way, and two of them spin the other way so that the main body of the quadcopter doesn't rapidly spin as it flies. (Conservation of angular momentum.)

So what makes the opposites-spin-the-same design better?

This design is to prevent unwanted yaw when moving, or vice-versa.

From this, you can infer that if the same-direction rotors were on the same side as each other, when creating a speed difference to yaw the aircraft you would also impart a roll. Similarly, when trying to roll the aircraft would yaw.

The image below shows visually how an opposite-corner rotation quadcopter moves: 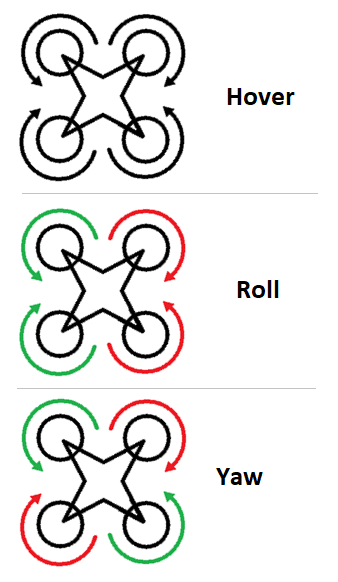 They don't necessarily have to spin in the same direction, but it gives the best results.

This has to do with the mathematics of drone flight. Pulling from https://drones.stackexchange.com/a/419/46, and in particular the mixing matrix:

(where ω is the motor speed, τ is the torque about the axes, and F is the vertical thrust. Furthermore, the +/- signs indicate if a motor is spinning clockwise or counterclockwise.)

This mixing matrix is the math that allows us to determine the motor speeds required for the desired movement (roll/pitch/yaw/thrust). Without that, nothing can work-- a quadcopter will fall like a rock without autonomous motor control.

The mixing matrix is subtle in that it tells the tale for the aircraft. For yaw, in particular, we're interested in the z-torque relationship on the third row. If there were other combinations of +/- signs, i.e. you didn't have opposite motors spinning the same direction, then the matrix would either:

Unfortunately, with linear algebra (i.e. math with matrices), the "division" by b is not universal. It can only happen if b has a property we call "invertibility", which means that for a system a = B * x we can only find the solution for x if we can find B^-1. In other words, a * B^-1 = x can only exist if B^-1 exists. Concretely, without the invertibility, there's no motor speed solution x which will give us the desired results a.

A matrix can only be inverted if it's square (rows == columns) AND if the determinant is non-0. The given mixing matrix is the only invertible combination of four props which returns symmetric performance.

Feel free to play around with the matrix on Wolfram Alpha, you'll find that there are other combinations which don't violate invertibility. These are workable and with additional motors and they can even have special desirable properties (see CyPhy Work's LVL 1 hexacopter)

Not the answer you're looking for? Browse other questions tagged quadcopters design or ask your own question.

17
How does a quadcopter yaw?

7
What process should I use to ensure my motors are spinning the correct direction when using Betaflight
18
Why do multirotors usually have four propellors?
4
What impact does a shroud have on the torque produced by the prop(s) of a multirotor that incorporates a properly designed shouded propeller?
17
Why are quadcopters inherently unstable?
1
When evaluating the weight of a multirotor, is there a standard way that the components are grouped?
5
Finding a ready-to-fly Taranis compatible, Eachine compatible, S4 compatible under 200€ drone
3
Why are micro pusher-prop quadcopters becoming more popular?
4
How to debug a non-working Eachine E010?
4
Can something be mounted underneath a quadcopter rotor?