How are Hall effect gimbals different than standard gimbals?

The difference is in how the gimbal position is sensed and reported to the processor in the transmitter. The two main types are potentiometer and hall effect gimbals, but in both types, the fundamental mechanism holding the gimbal and allowing it to rotate is the same.

Potentiometers are resistors which change their value depending on the location of the wiper along the resistive strip inside them. In a RC transmitter, the wiper is connected to each axis of the stick. The processor in the transmitter reads an analog voltage from the potentiometer and translates that to the axis' value. 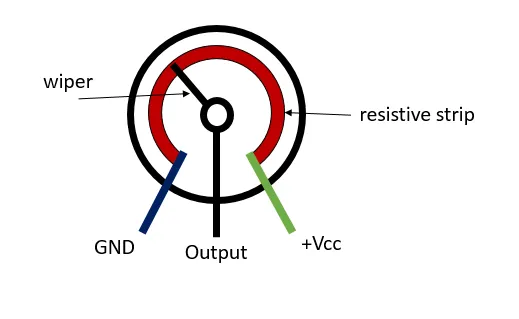 Potentiometers are generally less precise than hall effect sensors and tend to drift over time, leading to a need to calibrate the center point of each axis every once in a while. This doesn't need to be done with hall effect gimbals.

Hall effect gimbals use a hall effect sensor which is an electronic component that measures magnetic fields. In the gimbal a magnet passes over the sensor and it measures the magnetic field and that is used to determine the position. These are less prone to wear and are more accurate.

Regular gimbals use a potentiometer which is a physical sliding mechanism and can wear out over time.

Not the answer you're looking for? Browse other questions tagged transmitter comparison transmitter-gimbal or ask your own question.