What does Feed Forward do and how does it work?

Whenever there is an error, P would "push" the quad to reduce the error. So how does Feed Forward come to play?

The way the PID controller works is whenever the actual rate of rotation of the quadcopter does not equal the setpoint, or desired rate of rotation (which you set by moving the sticks), it sends a signal to the motors to compensate and bring the rate closer to the setpoint.

This signal is a sum of four terms: The P, I, D and FF. Since it's a sum, you can think of them as each pushing the quad in a certain direction independently, some terms adding up and others counteracting each other.

The P term is the difference between the setpoint and actual rate, multiplied by the P gain. So the amount of force applied by the P term is directly proportional to that difference. You can think of it as a spring that tries to move the quad back whenever it's bumped out of position. The further it's moved (bigger difference between setpoint and actual rate) and the stiffer the spring (bigger P gain), the stronger it will pull.

The reason why the FF term is needed is because the signal that the PID controller outputs influences the acceleration, not the speed directly. This means that the quad will not get up to speed immediately, but take some time depending on how hard it pushes itself. So when you want to sharply begin a maneuver you want the quad to apply a lot of force in that direction to get going and then sustain the rotation with a smaller force.

You can make the reaction faster by increasing the P gain, but to a point, as higher P gains lead to oscillations, when the quad's movements lead to big P terms which in turn cause bigger movements and so on.

So instead the FF term was added. The FF term does not consider the current rotation rate at all, so it does not contribute to the PID loop's stabilizing action and is thus unable to cause oscillations. The only thing that it looks at is the sticks. The force applied by the FF term is proportional to the rate at which you move your stick (multiplied by the FF gain). So when you, for example, initiate a roll and bump the stick to the right, the FF term will detect the fast stick movement and give a burst of force to get the quad going. Then, when you finish the roll and return your stick back to center, the FF term will detect the opposite fast stick movement and apply a corresponding force, helping the PID controller stop the quad's rotation faster and avoid overshooting.

30,000 foot view of feedforward as a general concept

In the case of a drone which is rolling, a feedforward term lets you anticipate that you will need some roll control, even if you don't know precisely yet how much. So popular flight controllers let you add in some amount of feedforward to have faster response to inputs.

Feedforward works very well in appropriate quantities. In a system like a drone, where it's constantly moving around and there is no real long-term, steady-state stability, feedforward can really accelerate response time and enhance accuracy. The devil's in the details, though, as each combination of airframe, motors, propellers, and atmospheric conditions will have a different optimal feedforward.

As a consequence, there are a myriad of ways to implement feedforward, and so there's no generic advice for how to tune it right. Another poster linked to https://github.com/betaflight/betaflight/wiki/Feed-Forward-2.0, and I would consider that a good resource on pathologies which can be experienced with Beta Flight. Other FCs will have their own pathologies, you will have to experiment.

This is at the root a controls question. In the world of classical controls[*], the PID was king. It turns out that simple things refuse to die, and much to the chagrin of controls researchers worldwide the PID is still king. Chalk it up to it being easy to understand and easy to tune for many systems, even if it isn't very good.

Here is a diagram of a Roll PID without Feedforward.

Feedforward has all those parts, except that it adds a new element, which is the predicted control based on the anticipated roll. Here is a diagram of a Roll PID with Feedforward. 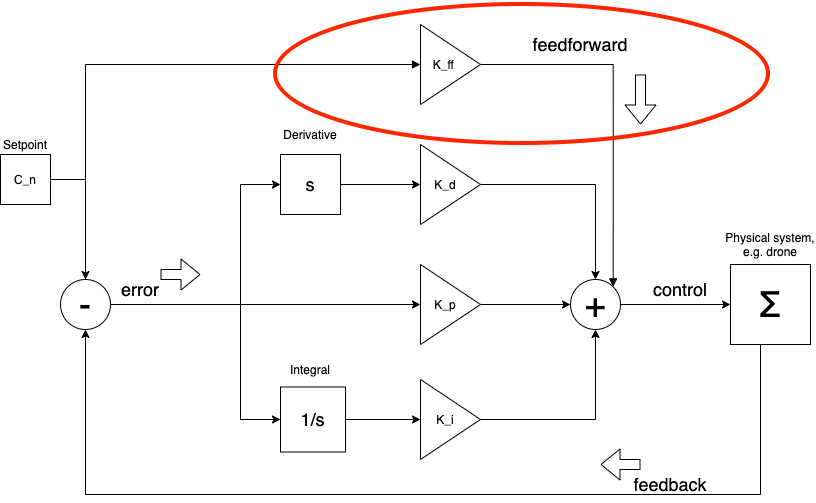 Notice that there is a new pathway to the control, which is completely independent of the error. That's why it's called feedforward. This pathway simply takes into account the desired outcome and blindly applies a control input based on that.

[*] The era of modern controls began in 1958 with the publishing of Pontryagin's revolutionary theory on optimizaton followed by R. Kalman's now-ubiquitous estimation filter. For a full history, read http://www.uta.edu/utari/acs/history.htm.

I'm far from an expert on this subject... but there's a good article here on Github which I find explains it well.

Basically feedforward is a factor which increases how responsive the stick is - somewhat like P, except that FF does not make the drone wobble at high levels. I quote:

FeedForward (FF) is a drive factor that increases stick responsiveness. It is proportional to the instantaneous derivative, or 'rate of change' of stick movement. The faster the sticks are moving, the more FeedForward we get. FeedForward helps P drive the quad into turns. Unlike P, FeedForward cannot cause oscillation, no matter how much FF is added.

With FeedForward, we get better stick responsiveness without pushing P so high as to cause wobbles. It also reduces the delay time between input and response. Less delay means less error and less I windup/overshoot. It is great for racing, LOS and radical freestyle flying. It isn't great for cinematic HD.

Not the answer you're looking for? Browse other questions tagged betaflight multirotor pid or ask your own question.

5
What is a ground loop and how does a common ground reduce video noise?
8
Can I configure Betaflight in the field without using a laptop?
15
How does one hold the motor bell still when tightening prop nuts?
3
How does a propeller with more blades create more "grip"
5
Where do we download Betaflight Configurator and Blackbox Explorer?
8
How to visually inspect the magnitude of PID gains?
7
How does frame stiffness affect a quadcopter?
6
How to identify and address multirotor motor overheating
3
How do I set up IRC Tramp for my HGLRC Forward VTX?
6
How to tune a Deadcat Quadcopter with 10 inch props and asymmetrical mass distribution along the roll axis with a low power to weight ratio?