What does KV mean on motors?

I've seen ratings on brushless DC motors like this one for something called KV. What does that rating mean? 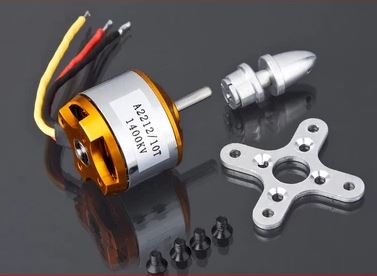 Ok, so this could turn into a very long answer!

The short version is, Kv stands for the velocity constant, and it has to do with the rotational velocity it takes to generate one volt of back EMF. Contrary to a lot of popular belief, it actually isn't a direct measurement of the RPMs at any given input voltage. There is an ancillary relationship between the velocity constant and the forward voltage relationship to RPMs, but there are a lot of other factors, such as bell rotational inertia (and anything else being driven), friction, and drive mechanics in the ESC that can impact the RPMs when the motor is actively being driven.

That being said, the no-load RPMs per volt is a decent estimate of Kv if you aren't concerned with being extremely accurate. If you're always using the same ESC and power supply, to drive the motor it can still be a reliable comparative metric between specific motors, even if it might have some offset to the actual electrical Kv of the motor when measured via back EMF. For a thorough discussion on the different methods of measuring Kv, check out this article on Bavaria-Direct.

Also, it needs to be pointed out that the torque and Kv don't have the relationship you might think. You can read a full article on the details over at miniquadtestbench, but essentially the torque constant or Kt which is directly proportional to the velocity constant (Kv) has to do with how much current a motor draws to produce torque, not how much torque a motor is capable of producing. This is a super important distinction. The torque the motor is capable of producing is defined by the internal resistance and the magnetic field strength at the stator. The field strength is defined by things like magnet strength rating (field density) thickness, and width/height, as well as the air-gap between the magnets and the stators (remember the inverse square law). The winding resistance is defined by the length and gauge of the wire used, as well as the number of strands. Assuming we can create a winding of equal resistance at different Kv by tweaking the gauge wire or the number of strands used, we would have equal torque capacity on both motors, only the torque would cost more current to produce on higher Kv motor.

The reason why there is a belief that high Kv motors produce less torque than low Kv motors is that the maximum torque output is limited by the maximum output rating defined by the heat dissipation capacity of the motor, and usually listed in the manufacturer specifications as a wattage limit. Essentially the higher Kv motor will burn out sooner than the lower Kv motor as the torque load increases at maximum output. However given a load that is within the power limits of both motors, a lower Kv motor will not produce better results (faster RPM changes or better handling of a given prop for instance) than a higher Kv motor with equivalent magnetic field strength and winding resistance. Also, throttle limiting the higher Kv motor to equivalent RPMs as the lower Kv motor will produce extremely similar results, albeit with higher current spikes on rapid transitions where the difference in Kt shows itself on higher torque demand. For more details on the math behind these calculations check out this article on MathWorks

KV, often stylized as kV, is a rating for how quickly the motor will rotate for every volt supplied to it. (units of rpm/volt).

However, this is only exactly true when there is zero load on the motor, thus making the rotation rate with no load applied the so-called "free-speed" of a motor. Adding a load to the motor, such as a propeller, will result in the motor rotating at a slower rate than its kV rating would suggest because the load exerts a force pushing against the electromagnetic force which causes it to rotate.

The relationship between the motor rotation rate and the voltage applied is linear. An excellent explanation of the physics behind this relationship can be found in this electronics.SE post.

Not the answer you're looking for? Browse other questions tagged motor brushless-motors or ask your own question.

4
Why do higher voltage batteries need lower KV motors?
11
What do the numbers mean on a brushless DC motor?
3
Is there an advantage to having more LiPo cells in a low-power drone?
5
Does motor KV requirement scale linearly with voltage?
4
Motor size and Kv advice for ZD550?