Effect of motor load on ESC?

I know that when a prop is caught on something or is slowed down by something it can put extra strain on the ESC or even burn it out.

If I was using a 2207 motor with an unusually large and heavy prop, would I need a more powerful ESC to compensate for the extra load of the large prop?

Would the ESC just need a higher Amp rating in order to operate under the increased load?

The primary thing that high torques affect in a brushless motor is the current flowing through. It obviously affects your ESCs, but also the motors themselves: high currents have been known to melt/burn the insulation on motor windings, which then short out and wreck the motor itself and possibly the ESC as well.

If the source of this torque is just a prop, the best way to see the actual effects of it on your particular motor would be to find a datasheet/spec sheet for it that lists thrust and current consumption for different combinations of supply voltage, prop, and throttle percentage, like this one: 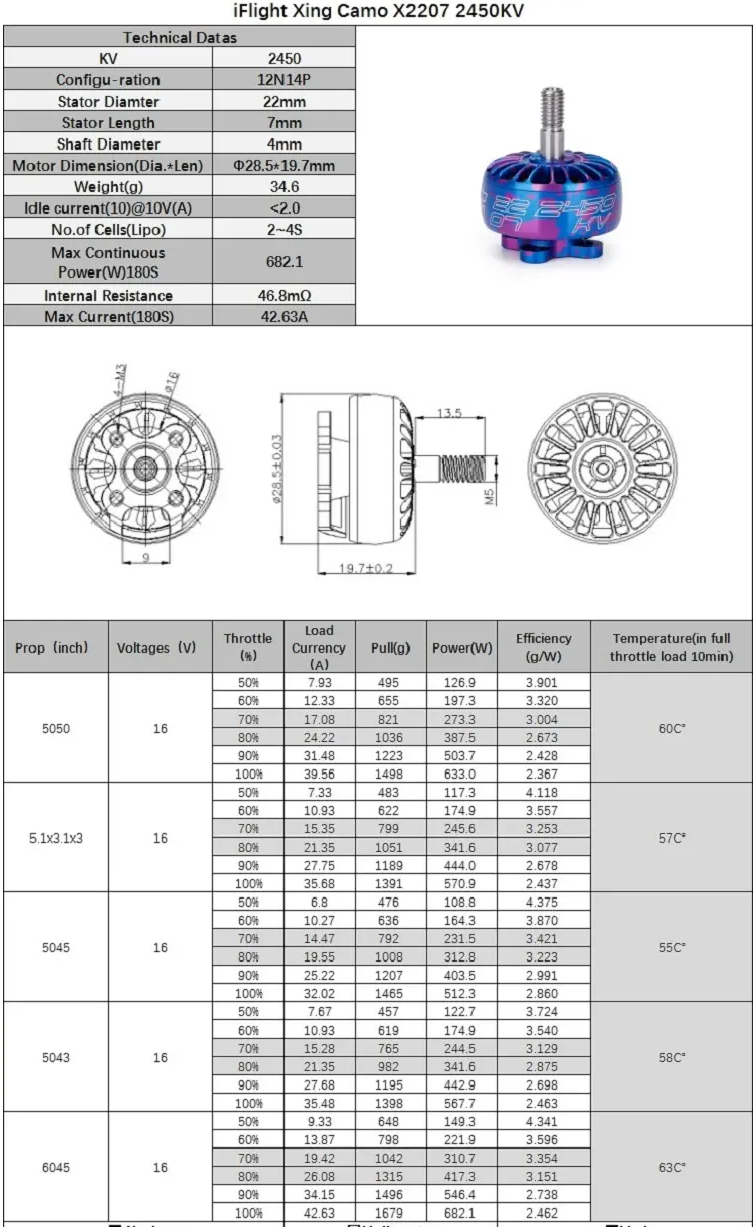 Not all manufacturers provide this kind of data, however. If yours doesn't, or you desire additional information, it's a good idea to browse the site miniquadtestbench.com. They publish the same kind of data, gained from thrust-testing a big range of motor-prop combinations in the lab, and have a handy search tool to find and compare test results for different motors, props and throttle settings. The graphs might be somewhat confusing at first, though: 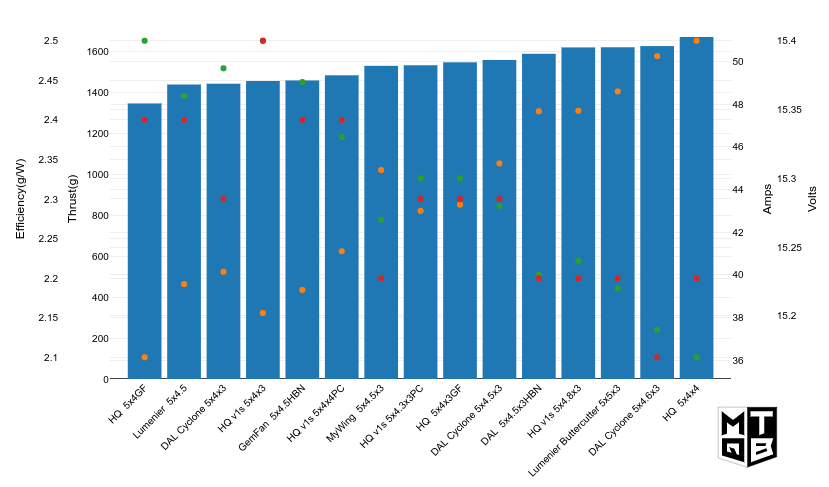 MQTB tends to use a greater variety of actual props, but the selection of motors is understandably limited.

If you don't find data on your particular motor in either of these sources, and you only need a ballpark, looking at specs of other motors of the same size and KV should be reasonably close, likely to well within ±10%.

I feel like it's important enough to mention this to create a new answer even though there's a ton of good information here already, as you mention it's the transient currents that kill ESCs. To be perfectly honest we're well within the rating of even 20A (25A 10 second burst) ESCs in terms of sustained current draw on almost any setup you can imagine. It's not sustained in-flight current that kills stuff. Dynamic unloading means current draw drops pretty quickly as the quad is moving forward even at full throttle, and there aren't too many batteries that can sustain even 100A for more than a few seconds. After 3-4 seconds the battery sags and the current drops away. I've never seen a battery that can sustain 100A for a full 10 seconds, even the highest C rated (for whatever that's worth) packs at high mAh. I've flown some ridiculous setups on even 20A ESCs and drained 1300 mAh from a pack in under 90 seconds.

What kills ESCs is transient spikes. As you mentioned typically those spikes come from blocked props or impacts during rotation that stops the motor. Also, those spikes can come from desync situations between the motor and the ESCs which has basically the same impact as a blocked motor, a current dump into the coils due to stall condition.

The reason I point this out is that a larger torque load on the motors can end up dramatically increasing those current spikes, not on a normal forward flight, but on rapid changes in RPM. If you check out the data on MQTB, you can see the instantaneous spikes on heavier props are dramatically higher than lighter props. Even on fairly light 5" props, current spikes on rapid throttle changes can hit upwards of 150A for a couple of milliseconds during rapid throttle changes. This is under static load, and the spikes can be even higher when the effective angle of attack is even greater (such as rapid changes in direction at full throttle when the quad is moving the opposite direction from thrust.) For instance, I logged on the bench a 2207.5 1800kv motor hitting 170A briefly on 6S during an instantaneous change in the throttle from 11% to 100%. 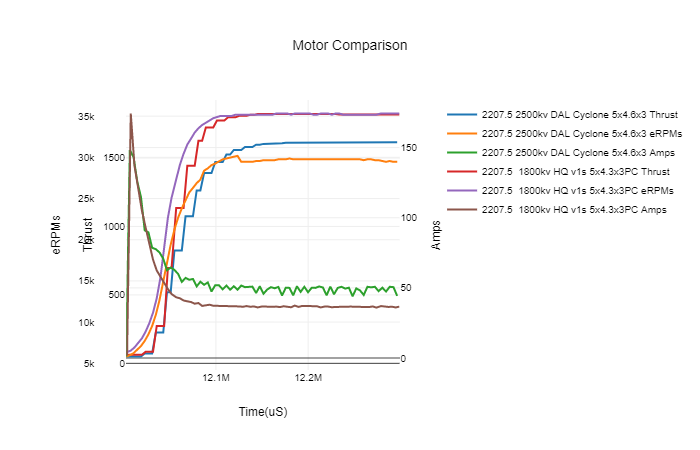 It's also important to note that the more torque a motor is capable of producing (the larger the motor stator size, tighter air-gap, or stronger magnets, etc) the larger these current spikes can become. Highly loading a larger, torquier motor is going to create larger spikes, given that torque is directly proportional to the current in brushless motors.

Now, this brings us to the solution. If you're using a BLHeli_S or 32 ESC you can decrease the ramp-up power, which largely eliminates these spikes. If you're considering pushing the torque limits of a motor I highly recommend making this change. Even 5" on 6S, reducing ramp-up power dramatically reduces the risk of desync conditions and smoked ESCs, and you're likely to run into similar. Even if you don't instantly smoke the ESC, the transient current spikes increase the day-to-day wear on the electronics, so making this change will likely increase the longevity of your gear in such high torque load situations.

With a larger prop the load on the motor increases. It's possible you'd need an ESC with a slightly higher amp rating, but also be aware that you may burn out your motor too. It's best to choose your motor based on your prop size, and then pick an ESC to match that motor.

Yes, it likely will require an ESC with a higher current rating. As a general rule of thumb, if it takes more work to spin a propeller, the ESC needs to be capable of safely providing more power.

It's also important to note whether or not the motor is capable of handling the power you're expecting to push through it. As you're talking about a 2207 multirotor BLDC, it's unlikely you would be attaching a large enough propeller for this to become an issue, but it's something to note for other designs. Pushing too much current through a motor can result in all kinds of fun situations where the motor overheats and either ignites or melts.

Not the answer you're looking for? Browse other questions tagged brushless-motors esc safety or ask your own question.

6
How to determine the lowest safe ESC current rating for a drone build?
1
How to prevent an ESC from overheating?

11
What does BEC, SBEC, UBEC, and OPTO mean for brushless motor ESCs?
5
How to create a motor startup tone with a BLHeli ESC?
6
Can I run two motors off of one ESC?
3
How hot should an ESC get?
6
Unrecognised ESC motor connector
4
How to secure the screw on a BLDC motor shaft
4
How tight should the screws at the bottom of the motor shaft be?
6
Help finding ESC for brushless motor
4
ESC shutting down when motor loaded
7
One of my motor don't turn if throttle is raised too rapidly