tl;dr: Your batteries will be perfectly fine well below freezing, and, provided you follow some simple rules, will probably actually live longer if you store them in the cold. But don't ever try charging lithium batteries (any kind) below zero, or they'll die very, very quickly.

Low temperatures do affect LiPo batteries in a number of ways, first and foremost being the increase in internal resistance as the battery gets colder. This is why LiPos need to be warmed up before flying in cold weather, as otherwise they will be able to sustain a much lower discharge current than usual and will not give their full rated capacity: 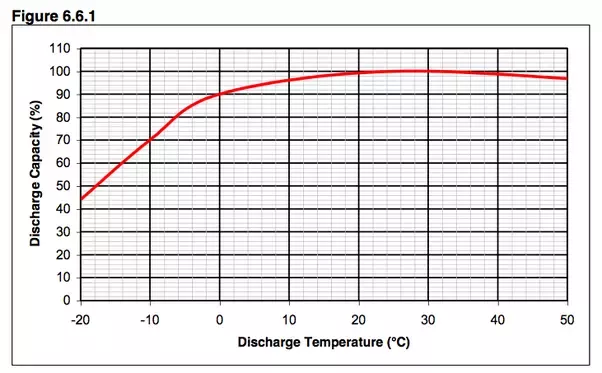 In flight the current flowing through the pack itself will hopefully generate enough heat internally to keep it warm, though for longer-flying platforms with low current draw (i.e. long-range fixed wing) an onboard heater or thermal insulation may be required to keep the cells warm.

As for damage, it does not occur in storage or while discharging even when a LiPo battery is brought below freezing; the rated temperature range for discharging is -20° to +60°C, and the electrolyte itself does not freeze until around -40°.

In fact, storing lithium batteries at 0°C prolongs their life compared to when you store them at higher temperatures. Some owners of Li-Ion batteries even claim to "revive" dead cells by placing them in a freezer for a week or so.

The one thing you should be really careful about when storing batteries at low temperatures is the possibility of moisture condensation on the battery's terminals when you bring the cold battery into a warm room afterwards or simply if the weather changes. This can cause a short circuit, which, while unlikely to damage the battery (as the water will likely evaporate from the current before anything truly bad happens), it is still unsafe and will corrode the battery's contacts through electrolysis.

So if you decide to store your batteries in the cold, and especially outside, put them in a sealed bag together with a baggy of desiccant (e.g. silica gel) so that the air around the battery is always as dry as possible, and when bringing them inside, _do not remove them from the bag until they'_ve warmed up to the ambient temperature.

However, if you try charging a lithium battery at a below-zero temperature, the battery will be rapidly and permanently damaged via the same lithium plating process that damages cells whose voltage is brought too low. The rate of damage is proportional to the charging current (i.e. more current damages your batteries faster), and the extent of it is such that manufacturers state that the battery is completely dead and should be disposed of if it's charged below zero even once.

The allowable charging temperature for lithium batteries is 0-45°C, but I'd recommend sticking to the middle of the range and only charging at room temperature.

Please note that the exact numbers (i.e. rated temperatures) are for Li-Ion cells, but they should be close for the whole lithium rechargeable family.

The exact meaning of cold" or "hot" can be a little subjective, but temperature does have an effect on batteries. Particularly so during operation, but your question focuses on storage.

As a real-world example, below are the thermal specifications for DJI's TB50 battery [source]:

As you can see, for shorter term storage much wider temperature variations are considered acceptable.

Even during storage, there are chemical reactions happening inside your battery. This can be reduced in a couple of ways - storing at the recommended charge level, and at cooler temperatures. The cooler temperatures slow down the reaction rate and can increase lifespan, but depending on the electrolyte the battery can freeze at temperatures as high as -30°C and when this happens, the cell becomes more fragile and the freeze-thaw process can cause damage in itself.

The other freezing risk is from moisture or condensation in the battery pack. If cooled quickly, or stored in a cold and humid environment, any water in the pack will freeze and can damage the cells.

Before charging, the battery should be thoroughly warmed to within the recommended charging temperature range. Take care to ensure the whole battery has warmed up - for larger battery packs, the core will take longer to warm while the outside feels OK.

We are battery manufacturer,Maxworld lithium battery, Temperature does greatly matters. Appropriate temperature will help to better reserve the battery performance, at 0 ℃~45℃ （32℉-113℉）@ 60±25% relative humidity will better storage the power and extend its service life!

Not the answer you're looking for? Browse other questions tagged lipo-batteries or ask your own question.

8
Will LiPo batteries deteriorate outside with the temperature changes due to day-night cycle?

10
How low can I safely discharge a LIPO battery during flight?
8
Alternatives to LiPo batteries
10
How do I safely dispose of my LiPo batteries?
6
What are the conditions for LiPo battery damage from undervoltage?
12
At what per-cell voltage should I land?
5
Empty Cells on LiPo - Balance Charger or Battery Problem?
4
Why do LiPo batteries get puffy?
8
Will LiPo batteries deteriorate outside with the temperature changes due to day-night cycle?