I have a camera taken out of an old usb webcam. It has four wires attached to and labeled on the board: 5V (red); DM (white); DP (green); and GND (black). I was thinking I could use it just like a 'normal' FPV camera and get a video transmitter for it. However, it has four wires rather than three like most. I read that DM and DP are both data lines, but as a high/low pair or something. What do I do with these? Is the camera usable with something like this video transmitter? 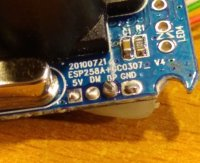 These four wires are most likely a USB connection, red and black are power, and the other two are USB data. That means you can't use it neither with today's analog gear, like the VTX that you linked to (as it requires an oldschool analog TV signal), nor any of the new and shiny digital FPV systems, like the DJI system (as they use their own proprietary protocols).

However, you can use it for flying if you really want or need it — you just need a computer on your drone that can process the video feed, such as a Raspberry Pi, and some kind of digital wireless connection, such as WiFi or even 4G to stream that feed to your phone or computer on the ground. That's how a lot of commercial drones work, and you can build something similar yourself.

Whether you really need or want it is another question. Using such a setup for the "sporty" kind of FPV flying, i.e. racing or freestyle, is probably a bad idea, as the latency will be very high, on the order of hundreds of milliseconds if not more. Such systems are more suited for long range and autonomous craft, which generally fly themselves (and sometimes even do some onboard analysis of the video feed), or just as a not necessarily practical but fun-to-make project to prove to yourself how cool of a hacker you are (or as part of such a project, like a facial-recognition patrol drone or whatever).

This looks like a typical USB pin connection: +5V, Data- (white), Data+ (green) and Ground. This camera uses a digital signal. Sorry, but it can not be used with a analog video transmitter.

Simpler and cheaper: No, it looks like a digital camera that needs to be connected over USB. This is not compatible with analog video transmitters. (If you want to save a bit of money look for some tiny whoop all-in-one cam and vtx combos. Those are very cheap with reasonable performance.)

If you feel adventurous: You can get a Raspberry Pi, Wifi dongles and try this: https://github.com/DroneBridge/DroneBridge :-) I would not recommend this as a great solution for most FPV drones. But it might be a fun project to do and it will allow you to use a camera connected over USB. :)

Not the answer you're looking for? Browse other questions tagged transmitter first-person-view video or ask your own question.

8
What should I look for when choosing an FPV camera?
7
Are real-time OSDs for HD FPV video systems available for drones?
4
Why is 5.8ghz used for FPV and 2.4ghz use for transmitters?
11
Can circularly and linearly polarized antennae be used together for FPV?
2
What does the TVL rating mean for FPV cameras?
3
FPV lag on visuo xs812
7
Streaming FPV over WiFi?
7
Reasonably priced FPV Drone for beginner
5
FPV camera not working
5
FPV system for ground vehicle