Motor will not go above half thrust. Why and how to fix?

I fixed the esc of my aircraft, but now it won't go above half thrust for whatever reason. Here is a short record of the electronics in the craft;

When I go above half thrust, the motor will stop spinning, and the plane will beep a few times. After about 3-5 seconds, if I pull the throttle back down to 0 and then push back up, it will resume spinning but still will not go above 1/2 thrust.

I do have a new esc on the way from amazon so that might fix it but still have no idea why the plane won't go above half thrust. Any idea why and how to fix it?

Plane has 1 motor, rudder, and elevator in use. Ailerons were not connected for the flight when I noticed it would not go above half thrust.

This sounds very much like like a PWM/analog ESC miscalibration issue to me. PWM ESCs required signal calibration to ensure that both the RC receiver and the ESC are on the same page about what kind of pulse length constitutes both 0% and 100%, as there can be clock speed discrepancies and other issues with the protocol. 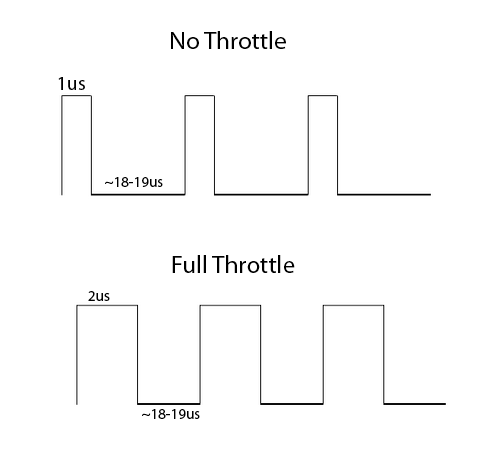 I can't exactly find a source I like for this procedure to explain it better, so here's my rendition: (modified from those listed here)

That could also be a lipo that has been over-discharged or for some other reason is just not able to provide as much current as it used to.

The way to check (assuming you don't have a 'known-good' battery for comparison) is to measure the voltage when you open the throttle. If it drops below 3v per cell and then cuts, it's definitely the battery. If the battery voltage hardly changes but the motor still cuts out, the problem is elsewhere.

Not the answer you're looking for? Browse other questions tagged esc troubleshooting or ask your own question.

7
How to fix OSD flickering?
7
Grinding sound on FPV motor but no apparent damage
4
ESC burned twice
5
Why does motor not want to go above 2/3 thrust?
4
Why isn't my manual DSHOT600 programming of a HobbyWing ESC not responding to direction change?
3
Why is the ESC not giving enough current for my propeller?
3
Motor doesn't work, ESC doesn't calibrate