How do I wire up this transmitter and camera

I'm a total newbie to FPV and electronics. My son bought the following components as an adventure into FPV for his Remote Control vehicles (cars, planes, drones). 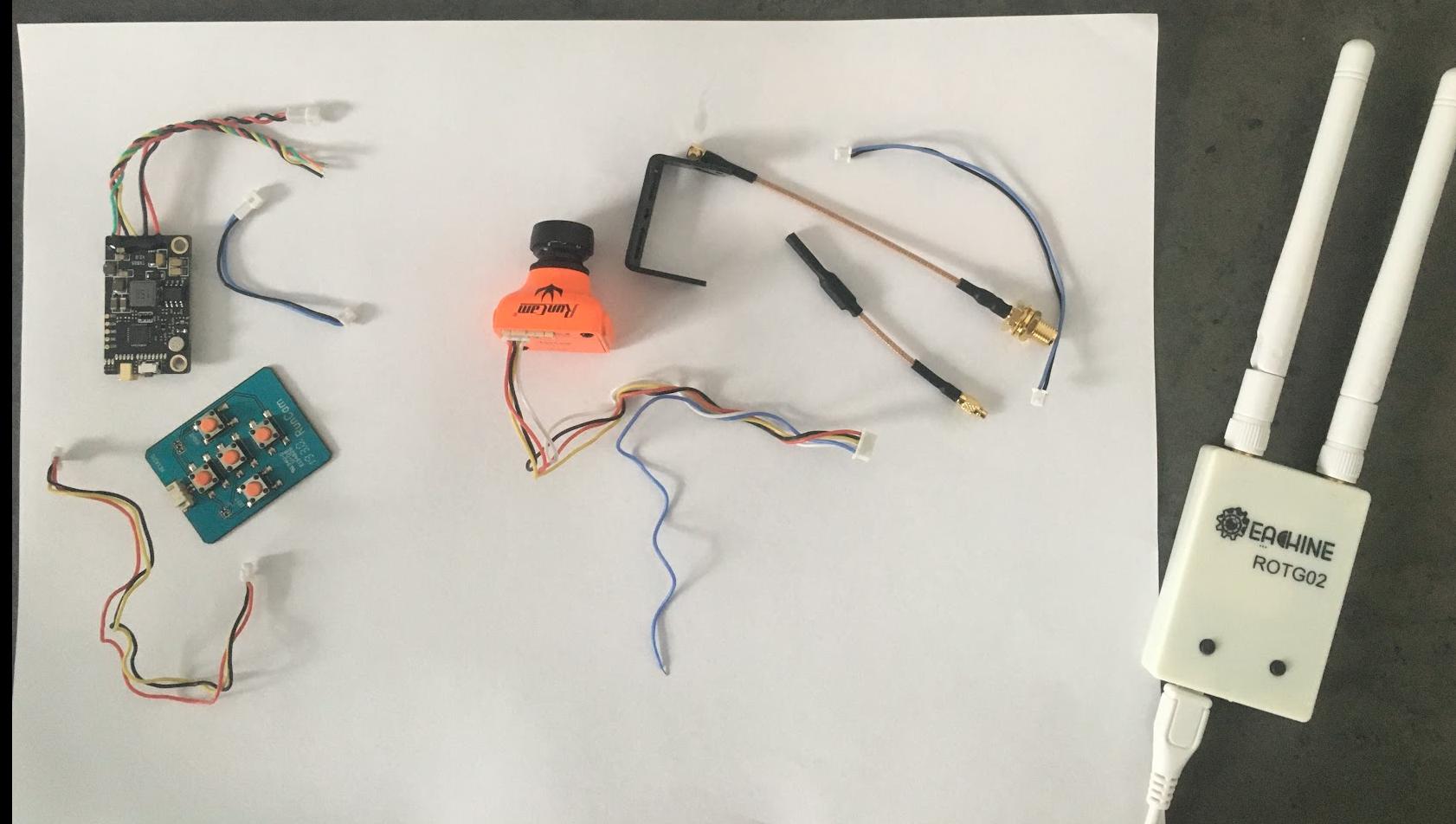 Descriptions of the components:

Second, from what I understand the transmitter has 5V out to power the camera, but I don't know how I'm supposed to attach the 2 together.

My first objective is to get the transmitter and camera connected, with a battery to power the transmitter - so we can at least get something working. Can anyone help me understand what I need to do?

These components can be split into two functional groups, one for transmitting a picture and one for receiving it, which aren't connected to one another by wires. The Runcam camera and Eachine VTX are both parts of the transmitting section, while the receiver doesn't need to be soldered to anything else in the receiving part.

You'll need to make the following wire connections between the different components: (splicing together the components' connector pigtails is recommended as opposed to trying to solder directly to the camera)

Essentially, both the camera and VTX need to be connected to each other for the analog video signal (one wire) and each need to have connections to ground/GND and a positive voltage source within their requirements.

In this setup, the VTX is actually the component that constrains the kind of power sources/batteries you can use. It requires 7-24V to operate, which means you can use 2S-5S LiPo batteries with it. (or another battery pack within the same voltage range)

Most drone/RC LiPo batteries these days come with either an XT30 or XT60 connector, but can be purchased with other terminations. See this page for a list of the most common ones. Once you know what your battery's connector is called, you can purchase a set of connectors online and solder them to the VTX and camera as required.

Once this is done, you can hopefully power on the VTX, camera, and receiver without issues, (remember to screw on the VTX's antenna before powering up so you don't damage it!!!) set the VTX and receiver to the same channel, and view the picture on the connected Android phone/tablet.

Did I leave something out? Please let me know if I did and something doesn't make sense...

Not the answer you're looking for? Browse other questions tagged video-transmitters fpv-cameras or ask your own question.

8
How to focus a newly-replaced lens on an FPV camera?
7
Difference between analog and digital FPV systems?
8
How to prevent a 5V supply from sagging to 4.6V when the FPV camera is on?
2
Does FPV transmitter antenna need to match the goggle receiver antenna?
5
Does the Ryze Tello have an adjustable camera angle?
3
FPV camera and beeper seems to be interfering with each other
4
2D/3D/fpv video glasses to use with external camera
5
FPV camera not working