How to prevent an ESC from overheating?

I have a 5-inch drone with individual ESCs on the arms of the frame. The ESCs tend to get very hot (somewhere around 70°C) and I'm not sure what is causing this and how to keep them cooler. Are there any ways to keep the ESCs cooler without adding too much weight to the quadcopter? Or is there anything I can do in the tuning to keep them cooler?

There is enough room to add things like heat sinks. (although I don't want to add too much weight)

Under normal conditions operating on the arms of a multirotor, ESC temperature should be well-controlled by the airflow passing over them from the propeller exhaust. It isn't a good sign that your ESCs are reaching dramatically higher temperatures like 70° C, given that you should be expecting to see ~30-40° C on a regular basis. One of three things is likely to be happening here:

Without knowing the exact details of your multirotor setup, it could be the first case due to the ease of accidentally picking too small an ESC to pair with power-thirsty motors and propellers. If this is true, then you should replace the ESCs with properly sized units, because there is a possibility that the overworked ESCs could catch fire or spontaneously die on you. (not to mention the fact that the efficency of the ESC will be decreased at higher temperatures)

However, the likely causes change because you're running a smaller multirotor, as @QuadMcFly said in his comment below: (emphasis mine)

I would add for a 5" inch drone it is extremely unlikely that the issue is related to the ESC. I have run even tiny 20A ESCs on some ridiculously overpowered setups and they come down cool when tuned properly. In the vast majority of cases, hot ESCs come from bad tuning or bad hardware, either in the FC or the ESC. The first place I would look is at flight logs of the gyro and motor output data. That will tell you right away if it's a tuning issue.

The heat you see generated by the ESCs is likely related to the power losses in the MOSFETs (metal–oxide–semiconductor field-effect transistors) used by most all ESCs to switch the power and off between the three phases of the BLDC motor. There are calculable power losses that occur while the MOSFET is conducting electricity and when it switches state between on and off, both of which contribute to heat generation.

The most direct solution to the issue is to add a decently-sized heatsink to the top surface of the MOSFET transistors and capacitors on the ESCs. You'd likely have to remove the plastic insulation for the best heat transfer between the MOSFET casings and heatsink. 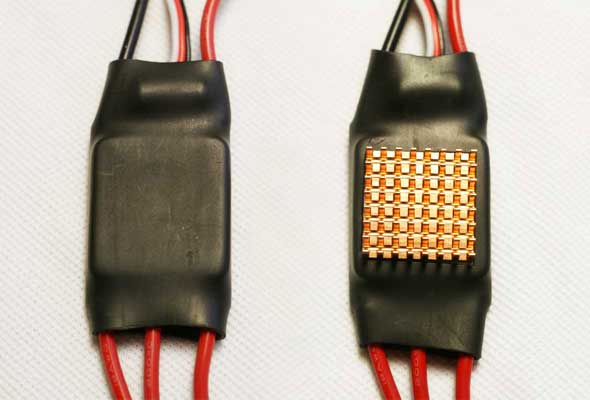 When you re-affix the ESC to the frame arm, it would be best if you also put down some kind of electrical insulation like electrical tape on the surface of the arm between it and the ESC so that there isn't a risk of the frame shorting out an ESC component.

70°C doesn't strike me as "too hot" for a power electronics device. By looking at the new generation of Mosfets used in ESC, I see junction to case thermal resistances around 51°C/W (°C per "thermal" watts) and Rdson around 2.9mOhms. With some ESCs specified for 40Amps max current, you could have with conductions losses only (so not taking into account switching losses) - something around Pdissipated_conduction = Rdson * I² = 2.9[mOhm] * 40[A]² = 4.6 Watts (thermal) -> therefore if you'd use only two of these mosfet for your H-bridge (one top side, one bottom side) you'd reach 231°C on each if no heatsink is used (anything above 100°C is not recommendable as Silicon semiconductors will melt at approx 125°C and of course, the casing must be able to withstand the heat as well without melting, of course)... So, it depends on the number of parallel branches of your hbridge (number of MOSFETs/2) on your ESC for dividing/spreading the thermal load and if there is an heatsink or not -> an heatsink would make the ensemble have much lower thermal resistance than 51°C/W, cumulatively you'd reach something around 10°C/W if you choose your passive heatsink wisely.

A word to the wise: if you're planning on putting an heatsink to your esc, you'll have, as it was written previously in the comments, to remove the insulation. But on some MOSFETs there is a metallic heatpad on top, made especially to conduct heat from the Source or drain of the MOSFET - so electrically connected! You ought to use a silicon interface pad or adhesive instead of silicon paste as the paste might not be evenly spread and shortcircuits might be achieved if something is touching the heatsink.

I don't know if it's on the consumer market or not, but purchasing something with SiC mosfets (Silicon carbide mosfet) would allow you to go to temperatures much much higher than 100°C if you want to make a beast people will remember haha - but then you'd have to be very clever about your mechanical arrangement - going metal?- so it doesn't melt + the printed circuit board would have to be Polyimide and not FR-4 substrate in order to avoid delamination... and yeah - this wouldn't be a drone for the kids, or you'd have to teach them not to touch it before it cools when it comes back from Hyperspace

Not the answer you're looking for? Browse other questions tagged quadcopters esc weight or ask your own question.

8
Why do brushless motors have 3 wires compared to 2 wires on a brushed motor?
2
Effect of motor load on ESC?

5
How to create a motor startup tone with a BLHeli ESC?
3
How hot should an ESC get?
6
How to determine the lowest safe ESC current rating for a drone build?
6
Unrecognised ESC motor connector
4
ESC burned twice
7
DJI F450 ESC calibration fail
6
Help finding ESC for brushless motor
6
Connecting 4 in 1 esc with power module
2
How to connect Opto esc to BLDC Motor