What is circular polarization in antennae?

I've seen references to left-hand (LHCP) and right-hand circular polarization (RHCP) with respect to antennae, especially in reference to mushroom antennae. What's the difference between the two polarizations and what does it mean for an antenna to be circularly polarized?

This is going to be a long answer but bear with me.

Now, the most common picture of an EM wave that you have probably seen is something like this:

While an antenna only generates waves of its corresponding polarization, it can receive differently polarized waves, as long as the electrons inside the antenna can move in the same direction that the electric field of the wave is oscillating. For example, an antenna oriented at 45° relative to the incoming wave's polarization, will still receive the signal, as it is still oscillating somewhat in the same direction, just (1.41 times) weaker: the electrons in the antenna can still be moved up and down by the wave, as long as they're also moving side to side so that they could stay within the antenna. In fact, the only situation in which such an antenna will reject (not receive) a signal entirely is if the antenna is perpendicular to the polarization direction: electrons can't move vertically in a horizontal antenna at all. In all the other antenna positions will have varying strengths of reception (or gains) depending on how much the directions differ (in mathematical terms, it's proportional to the inner product of the two directions).

The other main type of polarization is circular polarization, in which the electric field does not just oscillate in one direction, but instead rotates around an axis (along which the wave travels), with the magnetic field following, forming a spiral as it propagates through space. A circularly-polarized signal can be thought of as a sum of two perpendicular linearly-polarized ones, one lagging a bit behind the other: 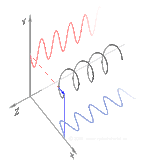 (note that the red and blue colors do not mean electric and magnetic fields here, this is the same field viewed from two directions.)

(for completeness, there is also elliptical polarization, which can be thought of as a sum of a circular and linear signal, or a sum of two linear signals that are not equally strong).

Any rotation must have a direction (or handedness), clockwise or counterclockwise, relative to the direction in which the wave is traveling. That is what distinguishes Right-hand circularly polarized (RHCP) waves from Left-hand circularly polarized (LHCP) ones. There are antennae specifically designed to emit and receive circularly-polarized waves, and they, too, must have one of the two possible directions. An RHCP antenna emits RHCP waves, and the same is true for LHCP.

Reception is more complicated. A linear antenna would receive circularly-polarized signals no problem, in any orientation (except if pointed directly at the signal's source), since, as we discussed, exactly half of that signal's power is linearly polarized in the antenna's direction (and the other half perpendicularly, so that part is rejected, hence the gain is 1/2 or lower). The opposite is also true: a circularly-polarized antenna of either handedness will happily receive (though at no more than half gain) any linearly polarized signal (which is half of a circularly polarized one).

The one kind of signal a circularly polarized antenna will reject is a signal of the opposite handedness. an RHCP antenna will refuse to receive an LHCP signal, and vice-versa. And that is the main reason why these antennae are used in FPV.

The bane of video signals in industrial and other environments rich in RF-reflecting surfaces is multipath propagation, or multipathing, as it's more commonly known. This is a situation in which the transmitted signal, besides a direct line of sight path, gets received via reflections from nearby surfaces. Since the reflected signal takes a longer path, it gets to your goggles a bit later than the direct signal. This delay is enough for the very fast scan rate of analog video to go forward several pixels, so overlaying this delayed signal (of which there are usually several) on top of the original one produces severe distortions in the image.

The good thing for us about reflected signals, however, is that a circularly polarized wave reverses its handedness whenever it bounces off of something, so a reflected RHCP wave becomes LHCP and vice versa (as the direction of travel changes, while the direction of rotation stays the same), which means that the antenna will reject all reflections (it will not reject double reflections, which will have the original polarization, but those are weaker than single ones).

Another bonus is that it allows sharing bandwidth better if pilots on close channels fly opposite-handed signals, as possible interference from the neighboring band will be rejected by one's receiving antenna.

As far as the difference between RHCP vs LHCP goes, as you can see, neither is better than the other physically, they are two sides of the same coin. However, in actual practice there are differences if you don't fly alone. Historically, RHCP has been several times more common than LHCP, and that means two things:

If you're not racing, the second point probably doesn't matter, just move a couple of channels away. If you are, you should probably have both RHCP and LHCP antennae with you and be ready to switch as directed by the organizers. Still, even if you're not a racer, it can be worth having a couple of LHCP antennae in your flight bag for when a lot of people are in the air; you'll get a much cleaner signal that way (and they will, too)!

Some receiving antennae, such as the Triple-feed patch, can be either RHCP or LHCP depending on where you attach the feedline. Those can be worth having if you can't decide or switch polarizations often, or just to reduce the number of antennae to own.

An image showing the difference: 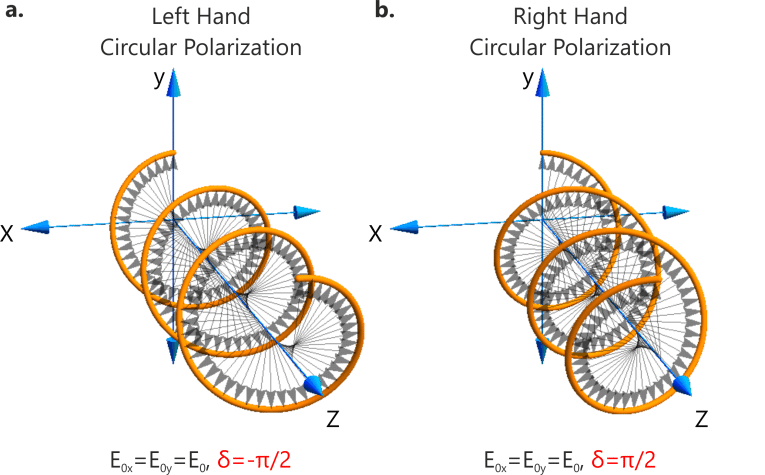 Not the answer you're looking for? Browse other questions tagged antenna or ask your own question.

11
Can circularly and linearly polarized antennae be used together for FPV?
7
Difference between analog and digital FPV systems?
2
Does FPV transmitter antenna need to match the goggle receiver antenna?

6
What makes mushroom antennae so good at receiving and transmitting omnidirectionally?
3
What are the exact specifications of a RushFPV SMA connector?
7
What is antenna gain?
4
What is the difference between a patch and helical antenna?
11
Can circularly and linearly polarized antennae be used together for FPV?
5
What is a “mushroom antenna”?
3
In what direction should I orient the dipole antenna on my 2.4 GHz RC transmitter?
5
Can I mount my RX and VTX antennae next to one another?