Why are quadcopters inherently unstable?

quadcopters performance stability
Share
Improve this question
asked May 18 '20 at 1:13

A stable system is one where there's a force that pushes the system back towards it's original state when the system is moved from its balance point.

In an unstable system, say a broom balanced vertically, once it moves from the perfect balance point gravity will pull it further away and it accelerates.

For a quadcopter, there is no force that returns it to its original location, holding it horizontal, or even preventing a gradual roll.

Even if the thrust from each motor was exactly the same, and the weight was perfectly balanced, it's very unlikely to be perfectly stationary. If there's even the slight amount of pitch or roll, the angle from horizontal will gradually increase. As the angle increases, the sideways thrust increases and the drone accelerates.

To a systems engineer, the rotation of the drone is neutrally stable - there are no forces increasing or decreasing the rotation rate. However the speed and position are unstable - once it starts moving, it accelerates.

I should mention that there are second-order (i.e. relatively minor) forces too. If you had a large fin on top of the drone, aerodynamic drag on the fin would return the drone to upright as the speed builds and limit the maximum speed - in practice this isn't useful as it doesn't return the drone to its original position.

Inherent stability is a concept from aeronautics – it is the tendency of an aircraft to return to an equilibrium when the controls are released by the pilot. Quadcopters are not inherently stable.

Say, you have the quadcopter rolling to the right: 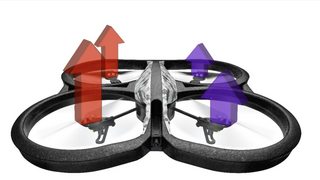 A quadcopter requires active counter manoeuvres to restore it to a stationary hover: 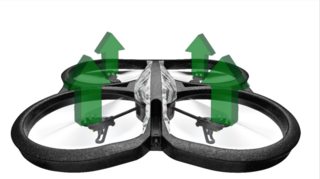 This means the quadcopter is inherently unstable.

It’s not entirely correct, that quadcopters are unstable. Most commercial copters have a center of gravity way below the Propeller plane and thus are actually stable. In contrast to that you want certain aircrafts to be instabile for better agility. For example some jet fighters are unstable and need electronic stabilization even for normal forward flight.

Not the answer you're looking for? Browse other questions tagged quadcopters performance stability or ask your own question.

9
Why do a quadcopter's opposite rotors spin in the same direction?
13
Why do most drones have upward facing motors?
3
How to reduce propeller tip losses?
5
Finding a ready-to-fly Taranis compatible, Eachine compatible, S4 compatible under 200€ drone
3
Why are micro pusher-prop quadcopters becoming more popular?
5
Visual references when driving a Quad Copter through gates
1
Is there a benefit to using multiple capacitors on FPV drones?
4
Can I re-flash the Hubsan fpv1 controller with built-in fpv screen?
5
why do drone frames have spaces and holes
4
ArduCopter motor spins at full throttle when armed