How does the center of gravity affect a quadcopter?

I have heard a lot about center of gravity for fixed wings, but very little about the CG in quadcopters. How does moving the CG forward or backward impact the flight characteristics of a quadcopter? For example, if I had a 5 inch drone, how different would it perform if I moved the CG from the center to a position right behind the front two motors?

Altering the location of the CG (center of gravity) also changes the CM(center of mass) because the force of gravity acts roughly on the CM. Normally, the motor arms are equally sized so that all motors have equal control authority and all contribute equally to providing thrust while in level flight when the CM is close to the center of the multirotor. Another way to say this is that multirotor frames are constructed so that the CG, CM, and CL (center of lift/thrust) are all as close as possible to one another. 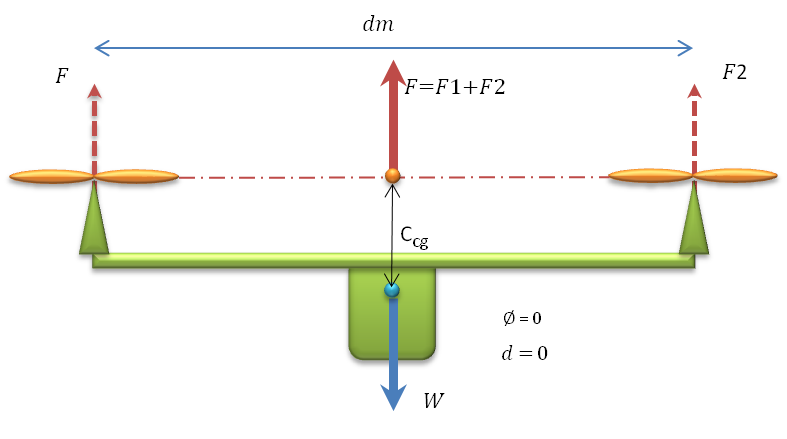 However, this is no longer the case because now each of the motors now has a slightly different lever arm distance to the CM of the multirotor. Consequently, not all of the motors have the same control authority and some of the motors will have to remain at higher/lower throttle than others while in level flight.

This will manifest itself in diminished flight performance. If all motors are running at the same throttle, the multirotor will naturally begin rotating with the longer lever arm(s) going upward and the shorter one(s) going down. If the distance between the CG/CM and CL isn't too great so as to not make the multirotor immediately flip over after raising the throttle, the I term in the PID controller of your flight controller should be able to account for the discrepancy after takeoff. The ability to pitch/roll in different directions will be different due to the asymmetric thrust distribution around the CG/CM.

Even so, it isn't ever recommended to fly with a significant distance between the CG/CM and CL. All (half-decent) frames are designed to minimize the risk that component placement will move the three far from one another, but this is an important consideration for scratch-built frames.

In the example from the OP, a case where the CG/CM was moved from the center to a location right behind the front two motors, the effects would be quite severe indeed. It's difficult for me to come up with a practical setup to create such a situation, but this is a good example of a worst-case situation, with the CG/CM to CL distance being close to 2/3 the arm length. (depending on the angle between the arms on the frame)

Not the answer you're looking for? Browse other questions tagged quadcopters performance center-of-gravity or ask your own question.